Home News Stories by run – Running through calli and campielli

Stories by run – Running through calli and campielli 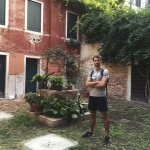 A bit of Venetian toponymy

Unlike any other Italian city, Venice owes its originality also for its toponymy. The turist who visits a city like this, for sure has to be surprised about the names of each part of Venice: the streets are called “calli”, the squares are “campi”, the waterway is “rio” and very often the names of places recur for tens of times in each district.

In fact in Venice there are thirty-one “Calle del Forno”, sixteen “Calle del magazen” and “Calle dei preti”, fifteen “Calle de mezzo”. Moreover must be added also the calli whose names are related to the most common job and trades in the past: the “calle pistor “(baker), the” malvasia “(resale of imported wine), the ” remer “(manufacturer of oars and poppets) and so on.
Coined by the people in everyday life, the Venetian toponymy has remained basically unchanged over the centuries.

The course of the Garmin Venice Night Trail was born in this so singular and picturesque landscape: a race along the Calli, which are about 3000 in the city, the streets, roads and lanes. The main calli, which first were paved, are known as Salizada, while those wider and rich in commercial activities are called Ruga. The Lista indicates that once in that road there was the headquarter of a foreign embassy: an example is the “Lista di Spagna”, closed to the train station, where once in Palazzo Frigerio there was the Spanish Embassy. Some parts are named Rio terà to indicate that once that place was occupied by a river which was undergrounded to create a pedestrian street.

However there are the Fondamenta: they are streets that flank with a side the water and the ones which are used as landing for merchant boat are called Riva.
The names of the calli often have origins linked to the life of the city as the Riva degli Schiavoni, which you will see during the Garmin Venice Night Trail before crossing Piazza San Marco. The name of this Riva comes from the past: here landed the merchant ships from Dalmatia, known as Schiavonia by the Venetians.
Therefore, one of the most famous calli linked to the city’s history is “Calle degli Assassini”: located in the San Marco district, this Calle was the scene of many heinous crimes as reported by Tassini in 1863 in his “Curiosità veneziane”.
In this network of narrow and thick streets, suddenly larger spaces open: they are “Campi”, places used as meeting points for the inhabitants all along. Once they were places also dedicated to the entertainment such as the running of the bulls or sometimes violent disputes between different factions of the city: nowadays in the “Campi” there are not such dangerous activities, but there is still the same liveliness thanks both to the inhabitants who came here to meet each and the children who here can have fun with the children’s games.

It is thought that originally the Campi were covered with grass, later paved assuming the current appearance. Among all stands Piazza San Marco, the only large space to be called Square as the heart of the lagoon city and symbol of the Venetian Republic.
Even at night you will be able to clearly read the names of places written in the “nizioleti” (small sheets), white rectangles which are painted directly on the walls that characterized the signage of the city.
Running in Venice will be like reliving the history of a past not so distant at times.