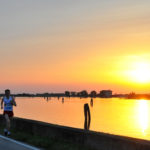 Let’s dive into the Venetian Lagoon!

The Venetian lagoon is the main co-star of the Moonlight Half Marathon, its beautiful colors at sunset and the life of the lagoon ecosystem will frame the course of the half marathon.

Looking at the inland of the lagoon, called “gronda lagunare”, you will immediately identify the characteristic features of the Venetian lagoon: a mixture of water and lands (some emerged and other submerged) and islands with more or less defined margins that change according both to the tidal flow and the intake of fresh waters by the rivers leading into the lagoon.

The closest place to the is defined as barene area, tabular island formations covered with herbaceous vegetation; The area around the shores is characterized by open waters and islands of artificial nature. The two lagoon areas respectively assume the name of the “laguna viva”, the first, and the “lagoon dead”. Under low tide conditions, the scenery changes again with the surfacing of the “velme”, bottom surfaces that will be submerged again by the subsequent rise in tide level. The lagoon panorama is complemented by lagoon channels at whose extremities branch smaller alveos, called the “ghebi”, which spray the farthest points of the valleys intended as lagoon mirrors delimited by defensive embankments (from the Latin vallum) with the aim to turn them into hunting and fishing reserves.

All of this means a slow but continuous movement of the Lagoon.
Punta Sabbioni, the starting point of the race, is a striking example of this change. The Republic of Venice already in the fifteenth century started to built civil engineering works to “immobilize” the lagoon to prevent the sinking. In 1888 the Punta Sabbioni dam was built in order to create a seaplane-free access channel in order to help the new industrial needs. The islands of Sant’Erasmo, Vignole and Certosa – formerly facing the Adriatic – “move” progressively their geographical position within the lagoon because of the accumulation of sediment transported by river waters which is intercepted by the marine currents of opposite direction. The first kilometers you will run trough are located in a “young” environment and while you will run along Pordelio you have to turn your gaze to your left towards Treporti, the historic waterfront Lido basin.

Punta Sabbioni’s coastline inexorably increases its size year after year: who knows, maybe in the future we will run a Moonlight 42K!