Home News Stories by run – Running by the fortifications of Cavallino

Stories by run – Running by the fortifications of Cavallino 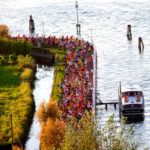 Not far from the historic center of Venice, with its suggestive squares, campi and hundreds of bridges, there’s the peninsula of Cavallino: a location between the lagoon and the Adriatic Sea, this place has an elongated shape and it’s characterized by cultivations, greenhouses, a thick pine forest and a sandy strip of shore.

Every year, many runners await the end of May for the Moonlight Half Marathon, a 21.097 km fast-paced course, ideal both to do an high-level performance and at the same time to enjoy a unique landscape at the sunset.
Running along the flat lagoon you will admire the many historic buildings that typify the whole peninsula.
These are military fortifications like barracks, telemetry towers and bunkers built to defend Venice during the Great War and today they represent a precious historical, cultural and architectural heritage.

For a long stretch of the route, from 5th to 15th km, you can admire the Forte Vecchio (also known as Forte Treporti), built between 1845 and 1851 to protect the mouth of the harbor of Punta Sabbioni and the numerous telemetry towers in Lio Grando, Crepaldo, Ca ‘Padovan, Ca’ Bodi, Sansoni and Vignotto. These were real observation points lean over the sea, whence the lookouts saw the enemy army, calculated the distance and transmitted the coordinates to the batteries dispersed in the territory.

While the telemetry towers were built in more internal locations and easily mimed by vegetation and other civil buildings, the batteries were mostly located along the Adriatic coast. They were built in the early 1900s, marked by 360° rotating towers, equipped with long-range cannons to easily inflate the enemy infantry and outposts. They held large caliber artillery capable to destroy the Austro-Hungarian navy fleet before the boats came under the coast.

Enjoy the sunset immersed in this open-air museum and then reach the lively Jesolo at moonlight.
Between km 17 and 18 you will cross the bridge over the Sile River (this time without steps) that has a short stretch first uphill and downhill; from there the landscape changes and the sinuous curves of the lagoon become sloping avenues, illuminated by the lights of the night and crowded of tourists and spectators that will incite you till the finish line.