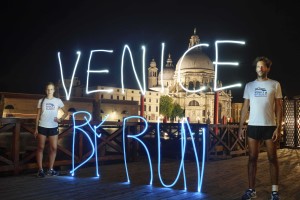 Andy ‘The Light Runner‘, a solo traveller from Sydney Running Tours, as a colleague wrote us an email in July 2015, few days before coming to Europe because his first stop was Venice and we could meet to know each other. So the day came and…what a shock! “Andy, are you really travelling like this??” We mean, if you are going to have a 2 months intercontinental journey it is resonable that you are bringing with you some stuff. In Venice we are quite used to any kind of tourists coming from the farest countries in the world and you can recognize them because they always drag huge and heavy luggages across the bridges (even if you use a water taxi you must be really really lucky to avoid at least one bridge crossing!).

The Light Runner’s equipment for more than 2 months of stay in Europe:

When he says light he does really intend light in all meanings, not only about luggages. The Light Runner decided to take a rest from his working life with a couple of months of solo travelling in Europe, led by his passion for running and for light painting photography, with the firm belief that “there’s a Light Runner in all of us. Everyone faces challenges in life, and everyone wants to be happy… the trick is combining the two!”. The plan was…no plan!

So we met him and  to be sure he felt comfortable we went for a trail running in Lido island just few hours after his arrival :). We had great time together that evening and following days, showing him beautiful spots, talking about life in Venice, letting him know about our tradition – food and wine is definitely one of the best way to do that in whole Italy and we used it as you can see in the featured image – and he thanked us with a marvellous light painting photo service on Venice by Run.

He left Venice after 2 days to attend a trail running race on the Dolomites and to begin a wandering journey following his great inspiration. We were really glad to meet you Andy and we hope to see you soon again. You are not anymore a colleague, you became a friend of ours.

Watch the trip on his Facebook and have a look to the great photos he shoots.